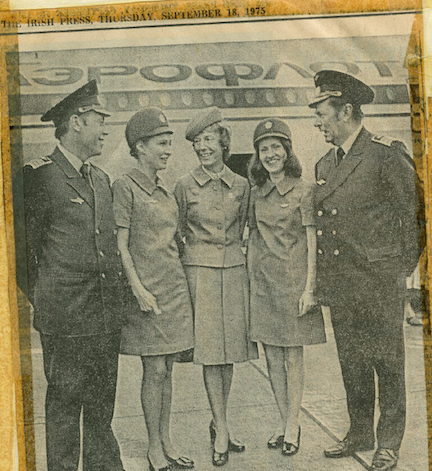 ASK anyone living on the Atlantic seaboard, and they will have a story about Shannon airport. It is the setting for some of the most dramatic moments in the West of Ireland life. We’ve all begun adventures there, and ended them, and we’ve all cried there – waving someone off, not knowing when we’ll see them again, or welcoming someone home forever, in a casket.

That’s one of the reasons why the decline of Shannon is so sad. This is not just another of those silly commercial airports that sprang up needlessly all over the country and are now surplus to requirements. This is not some glorified field in the boondocks. This is Shannon, Ireland’s first transatlantic airport. Charles Lindbergh, no less, was instrumental in its foundation.

This week, I tried (unsuccessfully) to get a flight out of Shannon to anywhere interesting. You can get to Puerto Rico, but that’s as exotic as it gets. You can’t even fly to Dublin from Shannon any more (not that Dublin qualifies as interesting to anyone outside Dublin).

The feeling of raw nostalgia was almost painful, because there was a time when you could get to Havana, or Moscow, or Luanda, by boarding a flight there.

When the first Aeroflot flight landed at Shannon in September 1975, the captain was presented with an Aran sweater. Witnesses say there was a brass band to greet the flight as it landed. The chief stewardess, who looks a little embarrassed in the photos, was given a nice bit of Waterford crystal.

This was the middle of the Cold War. America was aghast, but that didn’t bother Shannon. Throughout the 1980s, while relations between the USSR and the United States got progressively worse, Aeroflot breezed in and out of Shannon without a diplomatic care in the world. This was a neutral country then.

Nerdier-than-average children in the west plagued our mothers, as they drove past Shannon, to take us in to see the planes. You might catch sight of a giant Ilyushin beast, with Aeroflot’s hammer-and-sickle livery, and wonder at the lives of those on board. Would any of them defect this time? Or you might see a Boeing belonging to TWA, the airline once owned by Howard Hughes, imagine. (As I said, you had to be nerdier than average.)

Shannon was once run by enterprising, spirited people who were unwilling to let the airport decline simply because the jet age had made refuelling there unnecessary. Now it’s run by the Dublin Airport Authority. Enough said. The clue is in the name.

But the most brilliant wheeze for drumming up revenue at Shannon was undoubtedly the fuel deal with Aeroflot struck by the airport’s chiefs, Liam Skelly and Michael Guerin, in the late ’70s.

Under the deal, Aeroflot avoided the energy-crisis cost of aviation fuel by storing its own fuel at Shannon. With Aeroflot’s agreement, Shannon then began selling Soviet fuel to other airlines.

In an interview in the Moodie Report publication ‘The World Rovers’, Guerin described how tense things became after a Korean Air passenger airliner was downed by the Soviets in 1983.

“Not long after the Korean Air tragedy, we had a US military transport coming through to refuel. They were parked next to an Aeroflot jet, and the US personnel were shouting abuse over at the Russians about their terrible regime, and their awful country. The irony was that they were being refuelled by Soviet aviation fuel supplied by Aeroflot,” he recalled.

Shannon is now better known as an American quasi military base. After the US invaded Iraq, you were always elbow-to-elbow, airside, with juvenile American soldiers who inspired as much pity as resentment. And it’s now losing €8m a year.

But despite its intriguing past and lamentable present, Shannon has always been an easy-going, mannerly place. Lately I parked my car in the set-down area, ignoring the signs warning me it would be towed. Sure enough, ten minutes later I heard my registration number over the PA system, and a command to return to the vehicle immediately. An anxious-looking steward was standing beside my car. “You left your lights on,” he said.

Published in the Irish Mail on Sunday, 18th March 2012