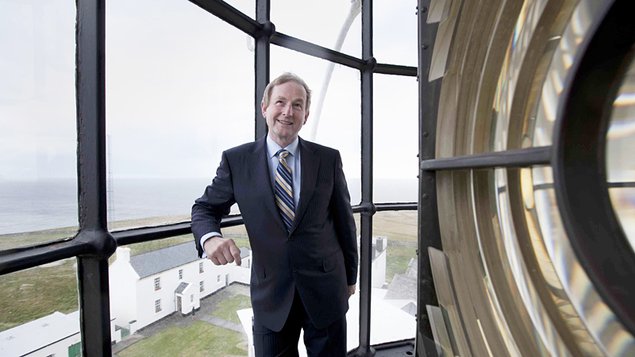 YOU could tell a lot about a lighthouse keeper by his clothes. If you were around in 1934, when James McGinley was principal keeper at Loop Head Lighthouse, and if you were in a position to give him the once over, you might have been able to form an opinion as to the character of the Taoiseach’s grandfather, and hence maybe of the Taoiseach himself.

Among the rules and regulations for Lightkeepers, a stern 53-page document issued by the Commissioners of Irish Lights in 1934, are the following stipulations with regard to lightkeepers’ uniforms.

This goes to show that, perhaps not all that surprisingly really, there were two kinds of lightkeepers – those who favoured aesthetics and those who favoured practicality – and the Commissioners felt it necessary to make allowances for both kinds.

There is no knowing now, all these years later, whether James McGinley preferred the elegance of a good quality serge jacket to the convenience of having a spare pair of trousers. But looking his grandson up and down in a hypercritical manner almost 80 years later – taking note of the unsophisticated pinstripe, the insubordinate hair and that reliable but archaic Nokia that he’s forever being photographed with – you can’t help concluding that this is a family that doesn’t rate appearances too highly.

Enda invoked his grandfather’s spirit on his visit to Loop Head lighthouse last Friday – and not for the first time. James McGinley is one of the recurring motifs of the Taoiseach’s speeches. He mentioned him at that memorable Fine Gael ard fheis in 2007, just before he amazed his party by losing another general election to Fianna Fáil; he mentioned him in his St Patrick’s Day speech on Capitol Hill last year; he mentioned him at his mother Eithne’s funeral mass in Mayo last November; and he mentioned him before a gathering of politicians, schoolchildren and local onlookers at the most westerly point in Clare last week.

“In a way, I feel I have come home here to Loop Head,” he said. “I feel a very strong spirit connection here because my grandfather served here as a lightkeeper but my late mother ran around this patch of grass and my uncle was born here so there is a very strong family connection in that sense.”

The uncle in question, Patrick Joseph McGinley, was also present. It was his first visit to Loop Head since he left the place with his family in 1934, when he was six months old. And in truth, before the lighthouse opened to the public last July, not many people visited Loop Head at all, barring those select few who stayed in the lightkeeper’s cottage, beautifully restored by the Landmark Trust and available for rent at €480 for a weekend.

That has all changed now. There were 17,000 visitors to Loop Head Lighthouse last year, which is very much a mixed blessing for the inhabitants of the peninsula. Those who own pubs, restaurants and B&Bs are glad of it. The rest of us survey the speeding cars, fuming buses and mounting litter and wonder yet again about that much-vaunted “rural tourism gain”.

Such were the numbers last summer that people frequently had to wait up to an hour for a tour of the lighthouse. They were often a little cranky already, by the time they reached Loop Head, having had no idea just how far out it was. They promised the kids a trip up the lighthouse; now they’ve driven 40 miles west of Ennis, the kids are fighting in the back of the car and there’s still no sign of this godforsaken R487 coming to an end. Remote is too small a word for this peninsula, and it’s not often that the story comes to us, as it did on Friday, when the Taoiseach arrived together with the ghost of his lightkeeper grandfather.

There are no lightkeepers any more, of course. The career was made obsolete when the last manned lighthouse in Ireland – the Baily at Howth – was automated in 1996. The last lightkeeper at Loop Head, Brendan Garvey, left in March 1991. And the history of the lighthouse, sadly, is itself a story of forced obsolescence. Loop Head Lighthouse once saved lives; now it makes money. Where once there were lightkeepers, now there are now caretakers, and county council officials, and tourists, and tour guides.

Your tour, presented by a superannuated former Loop Head lighthouse tour guide, starts here. Technically there has been a lighthouse at Loop Head since around 1670. In those days it was merely a signal fire in a brazier on the roof of a cottage (which still stands in the lighthouse complex).

The current tower dates from 1854. It is only 23 metres tall but, because of the towering cliffs on which it stands, its height above mean high water springs (MHWS) is actually 84 metres, and its range is 23 nautical miles. (Note to landlubbers: A nautical mile is a little longer than a mile.) Its character is Fl (4) W 20s, which means it’s a white light, flashing four times in 20 seconds. This, together with its daymark, is how mariners know it’s Loop Head.

The problem is that mariners know it’s Loop Head anyway, because they have GPS. For almost all of the many ships plying the Shannon estuary – from pleasure boats spotting dolphins to massive container vessels carrying cargo to Moneypoint power station and Aughinish Alumina – Loop Head Lighthouse is just for decoration. The lighthouse goes on flashing out its benign communication during all the hours of darkness, and it is benignly ignored. The message makes no difference to anyone.

Towards the end of his speech on Friday, reasoning perhaps that Loop Head was as good a place as any in which to torture a metaphor, Enda introduced the subject of the austerity treaty. “Just as this white light sends out the signal of hope and safety and confidence, may your vote on the 31st be the white light of hope and confidence for the future,” he said.

Then, after high-fiving the local schoolchildren, for all the world like someone who models himself on Barack Obama, Enda quickly surveyed the lighthouse exhibition and then ventured up the tower itself.

It was not clear enough to see the Twelve Pins to the north. Enda gazed south instead, towards the Dingle Peninsula, Mount Brandon and the Blasket Islands. Among those islands is Inishvickillane, once owned by Charlie Haughey – a man who, like Enda, preached austerity but who, unlike Enda, somehow managed to get away with it. This despite the fact that Enda is clearly wearing the worsted, whereas Haughey, had he been a lightkeeper, would have had the fine serge and still somehow finagled the second pair of trousers as well.

Published in the Irish Daily Mail, Tuesday 22nd May 2012 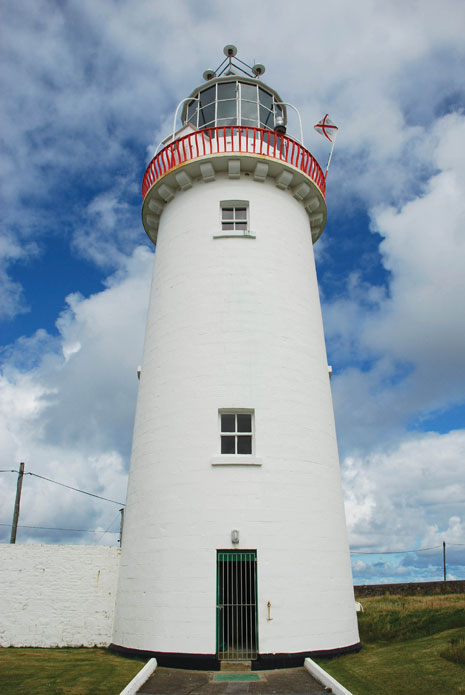 And so it came to pass, when Loop Head Lighthouse opened to the public in July. My new job necessitated hours of study about Fresnel lenses, daymarks and mercury baths, but all that swotting was not enough to dispel a bowel-loosening nervousness the first day.

The first tour group eyed me sceptically as I led them to the top of the tower, wearing a fetching high-vis jacket and finding it hard to breathe. I told them about Loop Head’s unique flashing sequence, and how every lighthouse is different, and that’s how mariners know where they are. These factoids had been new to me, and I presumed they would be edifying for others. But it turned out that practically everyone on that first tour had spent 80 or 90 years in the merchant navy.

“What’s the candle power of the bulb?,” inquired one elderly, salty-looking man. I looked away toward the west, into that vast blue space that both divides and connects us with the Americas, and mumbled that I didn’t know.

“What’s that, love? What did you say? Speak up,” he said, tapping his wooden leg and adding, “The name’s Ahab, Captain Ahab”.

“I don’t know,” I whispered, already reconsidering the wisdom of honesty vis a vis the best policy.

Another visitor pointed towards the lumpy coast of Kerry. “Arr, me hearty,” he cried. “Be they the Blaskets yonder?”

“Yes, yes, those are the Blasket Islands,” I declared, having abruptly realised that you don’t have to be certain, you just have to be convincing. Amazing that it took one day as a tour guide, and not 20 years in journalism, to learn that lesson.

In later days, having filled the gaps in my knowledge, I became shrill and emphatic. “You there at the back, you’re not listening!,” I would bellow at startled tourists. I began locking the door of the tower and subjecting visitors to multiple choice exams after their tour. If they got the answers wrong, I took to hitting them about the head with rolled-up copies of ‘Afloat’ magazine. Children grew tearful at the sight of me.

More to the point, I began to take possession of the lighthouse itself. All it took was a series of mornings approaching that lonesome tower – for so long a saviour of lives and now increasingly, tragically, obsolete, thanks to GPS – to engender a sort of emotional ownership, a protectiveness. If anyone climbed to the top of the lighthouse and was not surprised by joy at the experience, I took it personally.

We expected 50 or 60 visitors a day; instead there were hundreds. People sometimes had to wait an hour for a tour. You would look down from the gallery and see an angry mob gathering at the base of the tower. It was positively mediaeval. The danger was that night would fall and the mob would somehow acquire torches and pitchforks. Consequently, you had to hasten people of all nationalities back down the stairs, and as everybody knows, not all nationalities are equally susceptible to being hastened. (You know who you are, Germany.)

With very few exceptions, though, tourists are good-natured, patient, willing to be made laugh and eager to absorb information. But blow me down, they’re a motley crew.

One visitor had dentures so huge and so bright that I worried they might constitute a danger to shipping. Discreetly I positioned myself between the dentures and a large container vessel that was at that moment entering the estuary. A person with her own lighthouse has to think of these things.

One of the more memorable visitors was a blind woman who feared she might not be equal to the spiral staircase. So badly did I want this woman to reach the top of Loop Head Lighthouse – to ‘see’ it – that I would have shut down the entire operation for as long as it took to get her there. She got there.

One afternoon it was so foggy that the light came on in the lighthouse, beaming out its age-old warning to sailors. I led a succession of visitors to the top, where we could see nothing but  the light – and each other.

“This is quite Zen, really,” I said, in a feeble attempt to assuage their disappointment. Pointing south I told them: “If it weren’t so foggy, you could see the Blaskets there. But at least you can see the light – all one thousand watts of it.”