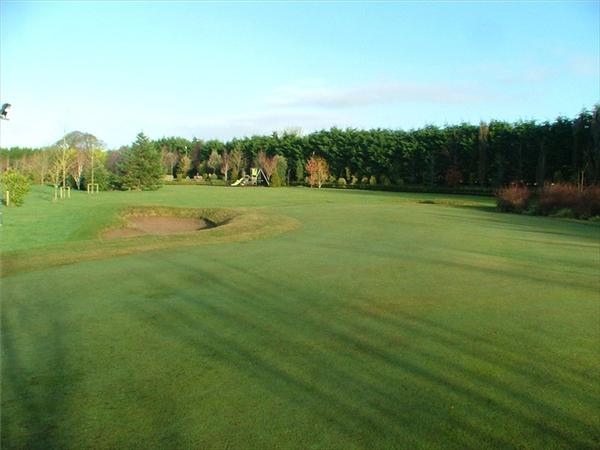 “An area developed for golf enthusiasts”?

THIS week we found out how both of the other halves live. The poor half are living in squalor on Dublin’s northside, while the rich half are enjoying a life of comfortable bankruptcy in England. The rest of us are somewhere in between, puzzling over our fractions.

The squalor has been found on Dublin’s North Circular Road, the heart of what used to be known as Bedsitland before bedsits were outlawed last month, solving one problem and creating another for reasons that really aren’t all that clear.

Environmental health officers from the city council inspected 589 privately-owned flats and found that 483 of them left too much to be desired by way of safety and comfort. They lack proper sanitation, they’re damp, they’re inadequately heated, they don’t have hot and cold running water, and their gas and electrical appliances are not properly maintained.

The landlords have been given a year to set their houses in order, which means the tenants have also been granted another year amid the cold and the mould and the potent reek of butane and lovelessness.

So much for the wretched inhabitants of the North Circular. The very same day that we found out about the living conditions of those misused men (and they might not be mostly men, but it seems likely), we also got a gratuitous gawk at the former home of a former boy from the former boy band, Westlife.

In 2004, Shane Filan built a massive, 10,000-square-foot McMansion in County Sligo at a reported cost of some €4 million, providing clear proof at the time that, from a financial perspective at least, if not an aesthetic one, you can do a lot worse than flogging vestal pop to pre-teens.

Then Filan immersed himself in property, and ended up €23 million underwater. So last year he was obliged to depart his homeland for the more clement insolvency regime across the Irish Sea, where he now lives in a house in Surrey worth a piffling €2.5m.

The estate agent’s listing for ‘Castledale’, as the Sligo house is known, includes an exhaustive description and 30 photographs for nosy parkers to pore over while mulling deep philosophical questions about what the life you didn’t live might have been like had you lived it.

Shane Filan’s house is set on four-and-three-quarter acres including a “small lake”. It has five bedrooms and six bathrooms and a bar and a gym and a studio and a three-car garage. So far so unlike anyone else’s house.

It also has a “piano area”, and… wait, hang on. If you’ve got a piano, then you’ve got a “piano area”, don’t you? Your piano must inhabit an area of floor, surely, unless you’ve suspended it from the ceiling for some idiotic reason of your own, or you’re just pretending to have a piano, or it’s made of anti-matter (and if your piano answers any of these three descriptions, please stop reading now and go and talk things over with someone you can trust).

Another interesting feature of ‘Castledale’ is that it has what’s called “an area developed for golf enthusiasts”. The agents don’t explain what that means but we can take a guess it probably entails a gin-tonic fountain, a wardrobe full of God-awful clothes, and a microphone, for all those faux-humble speeches.

The house has been stripped of furniture, so we don’t get to mock the previous inhabitants’ taste, more’s the pity. It’s not like Graceland, where visitors laugh superciliously at Elvis’s shag pile, while the voice of Elvis is heard protesting crossly from beyond the grave: “Jeez, everyone had it then! Is it my fault Priscilla hasn’t redecorated?”

‘Castledale’ is on the market for €990,000, or less than a quarter of its reputed build cost. But there’s a fierce bang of Westlife off the place. If those walls could talk… they’d croon breathily: “Take a look at me nooooow, there’s just an empty space.” Plus there must be a strong possibility that Brian McFadden relieved himself in any or all of the six toilets. Caveat emptor and all that. But if it’s sanitation and heat you’re after, it’s a better bet than the North Circular Road.

Published in the Irish Mail on Sunday, 3 March 2013